“Those who cannot remember the past are condemned to repeat it.”

We are currently living in “unprecedented” times, at least that is what politicians and Central Bank Governors keep drilling in our heads. Mario Draghi, head of the European Central Bank, frequently uses the phrase “uncharted waters”. Mr Draghi has used that phrase numerous times when he speaks about Greece: “If Greece were to leave the Euro, we’d be in uncharted waters.”

Well, some of these waters are very well charted.

Before the adoption of the Euro, each European Nation had their own independent sovereign currency, the most prominent being the Deutschmark, the Franc and the Peseta. But, even these sovereign currencies each belonged to a monetary system. For example, the Peseta initially belonged to the Latin Monetary Union (‘LMU’), established in 1865. And, for more than 100 years, the Spanish currency was pegged to a precious metal: it equaled 4.5 grams of silver or 0.2903 grams of gold, the standard used by all the currencies of the LMU. Unfortunately, the political disorder of the early 20th century and the effects of World War I caused the LMU’s demise.

Again, the peseta found itself without a monetary system, until it was replaced by the Euro in 2002 with an exchange rate of 1 Euro = 166.386 pesetas.

As illustrated above, some of these waters are very well – charted. The departure from currency systems, the consequences of unsustainable debt levels and the effects of establishing price controls are all good examples. The history of price controls shows they don’t work: they backfire on their governments because they misallocate time and money. They also misallocate imagination: people do the wrong things because the price signals are wrong.

Walter Bagehot, a wonderful Victorian journalist who served in the 1860s and 1870s as editor of The Economist, once said that John Bull – the proverbial personification of Great Britain – “can stand anything, but he can’t stand two percent”. He meant the British economy couldn’t function with low interest rates. Why? Because low interest rates instigate unwise speculation and resource misallocation: if money costs nothing to borrow, people spend it unwisely. Bagehot was obviously in positive interest territory. The central banks of Denmark, Sweden, Switzerland and Japan have all reduced interest rates to negative levels – meaning people pay banks to keep their deposits.

What a contrast to Vivier’s offering!

Negative interest rates are indeed a type of price control. They occur because people are “front-running”, trying to own bonds ahead of the European Central Bank, which it has already committed to purchase. The ECB is going to buy $60 billion of these bonds every month until it runs out of patience, time or conviction. In the meantime, these bonds provide a free ride for speculators.

If insurance firms sell bonds and raise cash, that cash carries a heavier, less advantageous capital requirement than does holding sovereign bonds. Therefore, insurance firms, banks and other regulated entities have embarked on massive bond purchases which has further exacerbated absurd sovereign debt levels.  Given that European insurance companies are rewarded for this kind of behavior, regulatory policy is exposed as perverse.

According to IMF estimates, governments have accumulated more than $63 trillion USD in total debt. The following visualization presents the breakdown of each country as a percentage of total global debt. 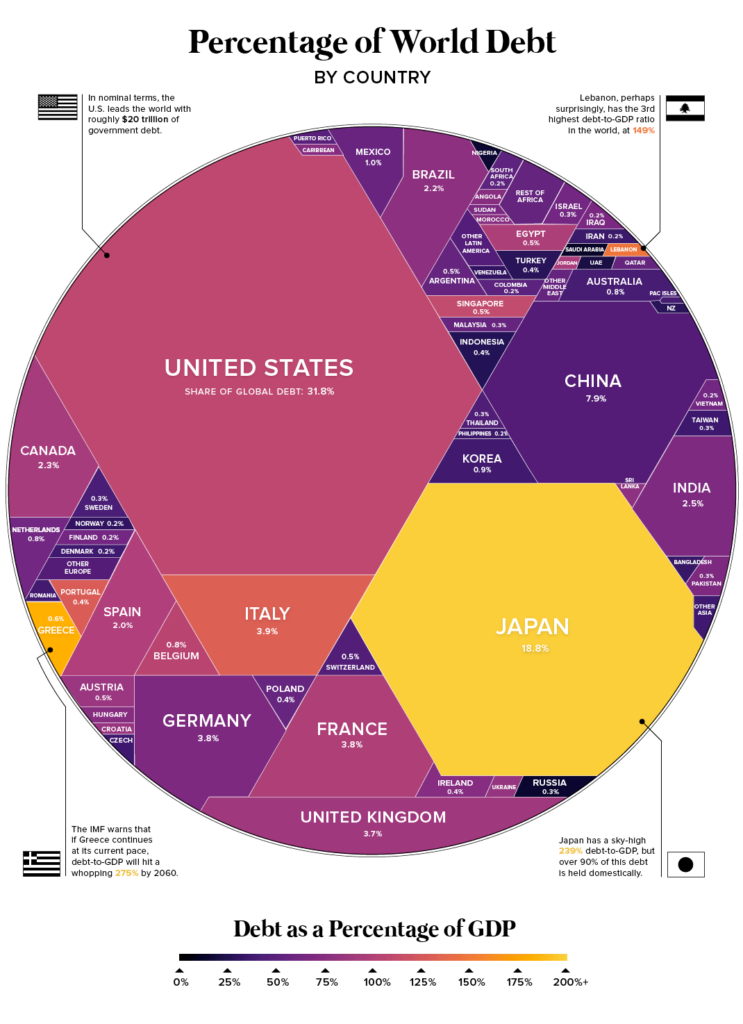 The largest three sections (and percentages) coincide with the three largest economies in the world. However, the fourth largest percentage is Italy, even though it is the 9th largest economy. That is why, a per capita representation on debt levels is more appropriate and enlightening, as can be evidenced below. 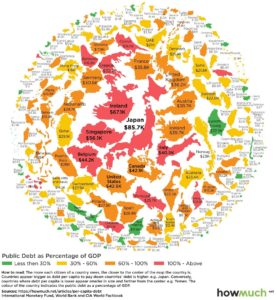 The author lived and worked in Japan for three years: given that almost all its debt is internal, its situation is unique. However, the rest of the countries above are susceptible to external creditors who can call back loans, as occurred with Greece (charted waters). The citizens in 9 out of 10 countries, depicted near the center of the map, carry more debt burden and are European. Spain’s debt level for example, means that every man, woman and baby would need to pay $26,800 US Dollars to pay off the country’s debt – which is growing as mentioned at the beginning of the article.

Three ways exist of measuring sovereign debt risk exposure, as this pertains to each country’s economy and finances. 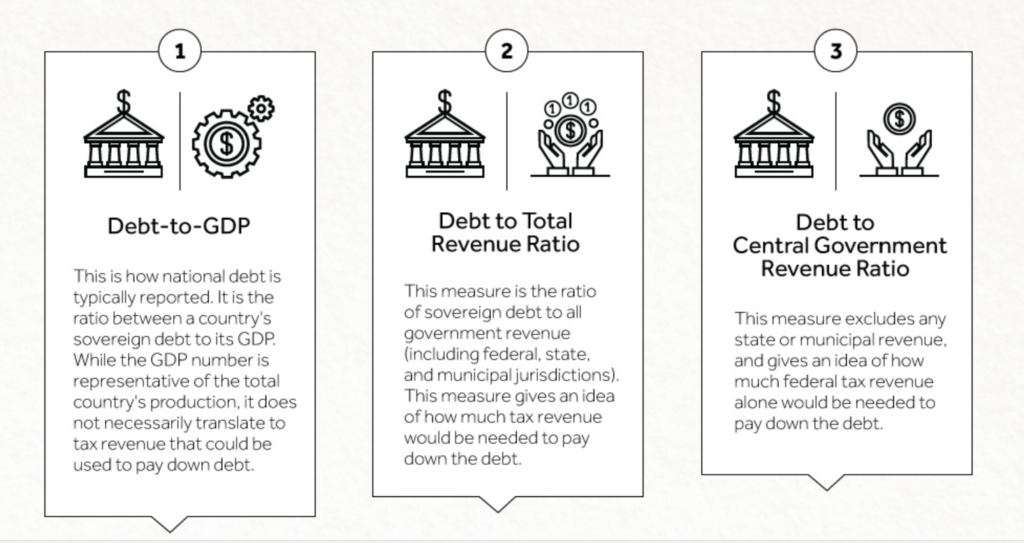 Measuring Debt levels as a percentage of total GDP gives us the following:

The countries ranked #6 to #10 with the highest debt: GDP ratios are Ireland, Belgium, USA, France and Spain.

If we were to measure Spain’s sovereign debt with the second approach – as a percentage of total revenue (this includes all federal, state and municipal tax revenues), then Spain would be ranked as the eighth most indebted country.

However, if we exclude any contributions or fiscal revenues from municipalities (think of Catalunya) then Spain jumps to the third most indebted country in the world. This puts Spain ahead of Greece, which was #2 in debt-to GDP, #2 in Debt to Total Revenues and is now #4 in debt-to-Central Government revenue. 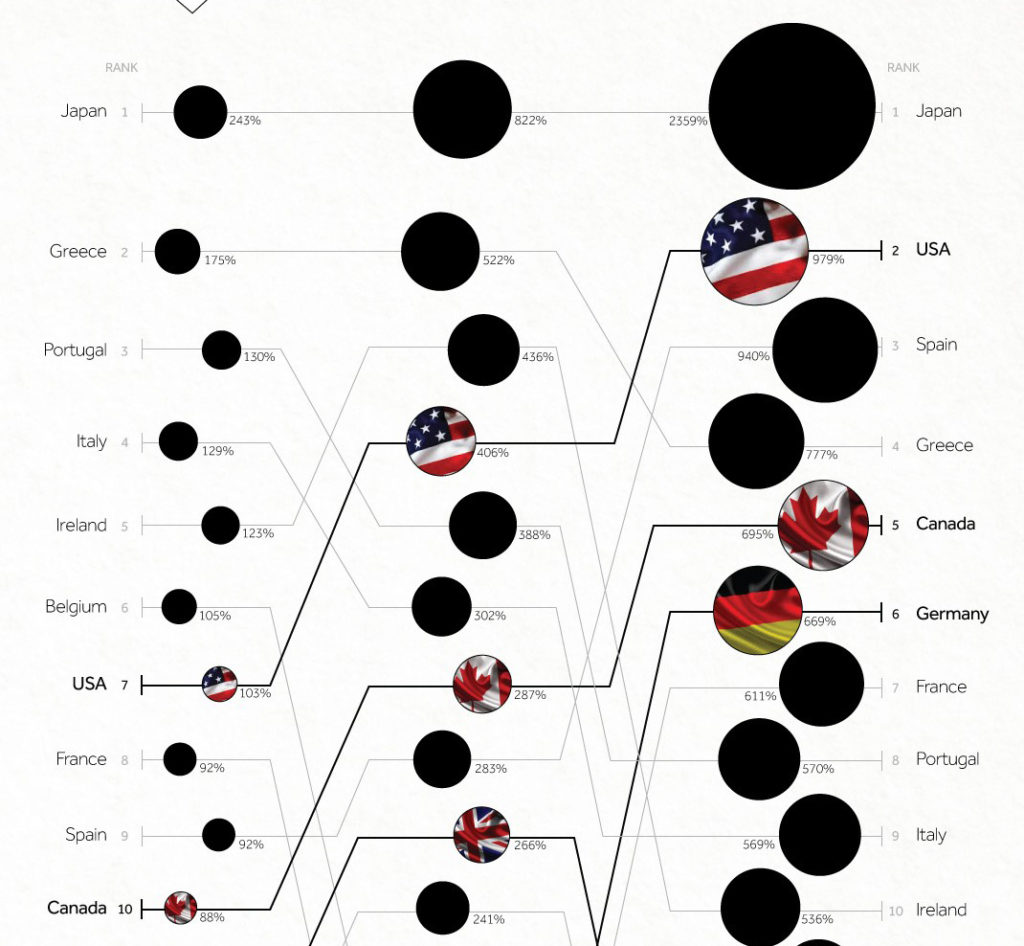 Vivier believes that these absurd debt levels will result in corrections to yields and currency exchange rates. We are still very bullish on high yield, short to medium term bank deposits but are very bearish towards bond instruments.

Regulators keep saying that sovereign bonds are safe, as if they were so intrinsically. But the truth about assets is that nothing is intrinsically anything. All things are safe or not or value-laden or not, depending on price and earnings and perspective. Yet the world has quietly acceded to the idea that bonds are inherently safe. The Wall Street Journal and Financial Times use language like “super-safe treasuries.” In the 1980s, when these treasuries were yielding 15-20 percent, nobody was calling them safe.

Vivier has consistently offered more than 6% interest per annum on its long-term USD, GBP, EUR, JPY and CHF denominated deposits. Can you find any more reliable, fixed-income investment product in the marketplace?